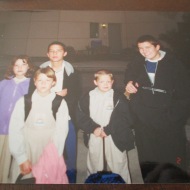 A thin veil of fog still drifted past my thinking and functioning brain, protecting me from everyday events that were no longer fathomable. I bit my lap and scratched my chin holding back a flood of tears that would inevitably turn to sobbing. Choking and gasping breaths had been quieted and normal respiratory functions returned. A single tear dripped down my face landing awkwardly just beneath my nose.  I could not let the barrier down, the one that held back uncontrollable desperation. It did no good to cry and fueled a rage that had now become unyielding. I wiped my face and pulled my clothes together in a tidy fashion, spitting on a tattered sleeve, pausing before I opened the door and silently drifted away.

A solid and unwavering resolve that had been steadfast until his advances had become aggressive and unrelenting now teetered.  It had been 10 days since his arrival and simple kindness interspersed with cold and calculating manipulation was somehow noticeable as I watched his eyes. I had never seen this thinly shrouded phenomena that reeled me in and then knocked me down repeatedly until now. I smiled and laughed nervously, keeping him at arm’s length while still offering a measure of appeasement. He edged nearer, placing his hands just over my shoulders and onto the wall, his body pressing closer with each movement. A part of me wanted to give in and surrender to a sick and familiar reality that kept the relative peace for days, hours or possibly only minutes. He spoke quietly and reminded me that I was the mother of his nine children, the key to all that he held dear in this earthly existence. I scratched my chin and cheek inching closer to the bathroom door, almost forgetting the previous violent encounters in Al-Khobar and Riyadh.

I knew that submission would once again fuel the never ending cycle and would also mean a short lived peace. The choice had never been mine to make and had always hinged solely on survival. But in the present I felt a surging power and with it the reality of his words that left an indelible mark, “Lynn, you are only good for one thing“.  I entered the bathroom and slammed the door,  knowing full well a price of some kind would be held in the balance.

This site uses Akismet to reduce spam. Learn how your comment data is processed.