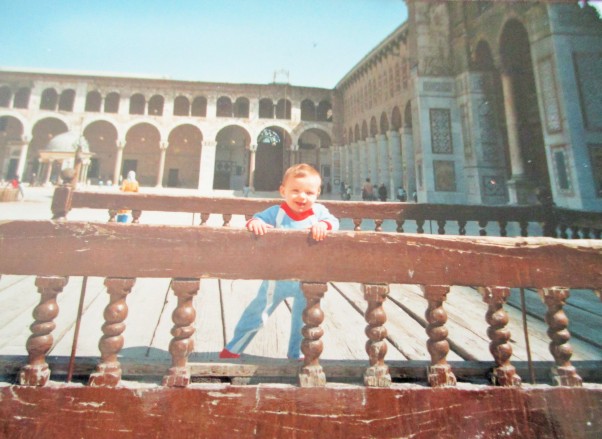 Picture of Osama on our visit to see in-laws, 1988. I came across this picture recently and it brought back so many memories.

Osama was only 8 months old when I decided to travel to Damascus. I was 2 months pregnant with my second child and having horrible morning sickness. He did not tell his parents that he had married me or that we had a child. So, when Osama was a few months old he told his brother, who then informed the family. They were upset and furious and wanted nothing to do with us!

They told him they would never be happy about this decision and that was that. Being the stubborn person that I am in such issues, I insisted on traveling there and making them see that I was a good wife and mother. He dropped us off at the airport in Seattle and when he arrived home received a letter saying,  please do not send this lady she does not know the language or culture and it just won’t work! It was too late we were already on our way!  I spent 5 weeks with them. The night before I left my father-in-law sat with me and told me, “Um Osama (mother of Osama) we love you and accept you! I am glad I put in the effort and when tough times came my mother-in-law stood by the kids and I!