When I lived in Seattle I had a good friend, Diane! She and I have stayed close throughout the years and she even visited me while in Saudi! I went to her house for dinner and she served this amazing dessert! I had never tried homemade cream puffs and had no idea how to make them. I asked for the recipe and she generously jotted it down.

A couple weeks later I had a dinner and invited her. I took out the recipe and started making them. As I watched them puff in the oven I broke several of the basic rules, I opened the oven to check them, I took them out when they looked very pretty, puffed and golden! It was like a cartoon as I watched my lovely puffs slowly fall into a blob! They were completely done and cooked but were just flat! I tried to piece them together and make what I could of them which was a big mess!

I didn’t give up which is what I tell everyone about baking and cooking, it isn’t an over night thing! The next time I made them I turned the heat down and let them cook longer until they were not pretty, but a brown, hard looking thing! I learned not to open the oven door and since then they have been fairly easy.

In a saucepan place water and butter. Turn on medium heat and let the butter melt and the mixture lightly start to boil. Turn heat off. Remove from heat. Add 1 level cup of flour and whisk immediately. This should form into something thick.

Add eggs one by one and slowly incorporate

Do not mix, slowly fold.

when the eggs are lightly mixed in you can mix more vigorously.

Place dough by spoonfuls onto baking sheet leaving a space in between. 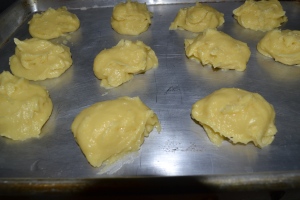 Do not open oven during baking time.

Remove from oven and cool.

When puffs are cool, slice top off and take out soft middle, discard. 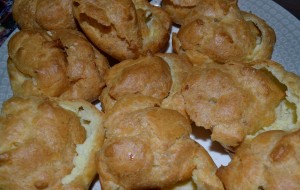 whip the cream and fill puffs. 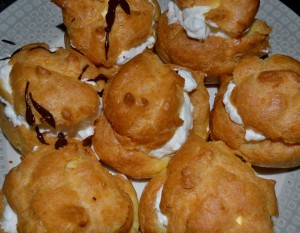